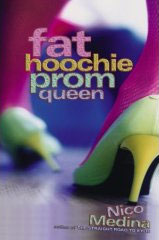 If nothing else this book should get best title of the year. Fat Hoochie Prom Queen is not only fun to say, it looks good on the cover too. Luckily this second novel from Nico Medina features a good story to go with its title.

The story is cut from the Ugly Betty style of plot development. Margarita Diaz, who goes by Madge in honor of Madonna, is “fat, foxy and fabulous.” She doesn’t sit around and complain about her weight and she doesn’t take any grief about her weight. As young adult books go, it’s great to see a strong, independent, woman protagonist at work. Madge is at odds with her former friend Bridget over something that happened nearly a decade ago. It has come down to a competition for prom queen. Everything is on the line for these two as they battle to see who can get the most votes and walk away with the crown.

There is a lot of great material in this book and I really can’t give away the solid lesson that’s learned at the end otherwise it gives away too much. Suffice to say that, as someone who grew up on Saturday morning TV where there was always a good moral, this book comes through with flying colors without seeming too preachy.

The thing that bothered me in this book, especially since it’s targeted at the YA audience is the abundance of drinking and hardcore partying that happens with no consequences other than a hangover. I kept looking for some sort of anti-drinking message here but it never came. I get that there are parents who look the other way when their kids drink and I get that kids party. It just came off as excessive (I know I said I liked the non-preachyness but I think this could have been handled in a similar fashion to the main plot).

Back to the positive points though, Medina also uses this book to let us catch up with the main characters from The Straight Road to Kylie. It’s been just about a year since the events in that book so it was great to see what was up with Jonathan and Laura.

Overall, another solid read from Nico Medina. I hope he’s already working on another book.

Next up, in preparation for our Proviencetown trip next month:Ptown: Art, Sex, and Money on the Outer Cape by Peter Manso.