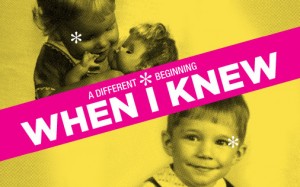 Last night we watched the HBO documentary When I Knew, which features an array of people telling the stories of the first time they realized they were gay. Some of the stories are amusing, like the man who was obsessed with the man on the Doan’s Pills box. Some are what you might call “regular” stories, like the guy who picked wildflowers instead of playing football. Then there are the heartbreaking ones, like the girl who figured out, while driving to her best friend’s house, that she was actually in love with her and it was a love that was not going to be returned.

You can learn more about this film on HBO’s website. The documentary is based on the book When I Knew by Robert Trachtenberg, which features stories from the famous and not famous. You can catch the film on WMax July 16 at 6:55 am ET and July 22 at 6 am ET. It’s also on Cinemax on Demand or you can pick up the DVD on Amazon.

Looking back now, for me, I knew in the 10th grade. I was 15. There was a guy named Kip. We shared a few classes throughout high school. He was the first boy I knew that had hair on his chest, and no small amount either. He’d wear polo shirts and you could see the hair, and it was hard not to look at him because it made him very attractive. In the summer, combine that with him wearing shorts that showed off hairy legs and it was really quite something. Of course, attending high school in Alabama in 1983, these feelings were put away and not discussed.

The filmmakers talk about the often long gaps between realizing your gay and actually coming out… and how it’s usually not until you come out that you figure out when you actually knew. For me it was a decade before I’d come out.