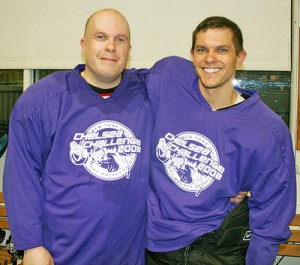 This time last year I blogged about meeting Josh K from Josh and Josh Are Rich and Famous (check out “Blogging World meets Real World“) since he was a volunteer at Chelsea Challenge registration.

Over the past year he and I have stayed in touch as he’s been working towards making his hockey debut this summer. He was all set to join this summer’s NYCGHA clinic and he returned to the Challenge registration table last night to help me check in players.

I made the random comment that he should join Purple Rain because I’d had someone drop out and now the team didn’t have a balanced  number of 13. It took a lot of convincing from me, other Purple Rain team members Adam and Ari, other NYCGHA members like Robb, Kagan and Keith. I also worked quickly to diagram the game’s rules so he understood the basics. Ultimately we were successful! Josh went home, returned with his gear and made his game debut.

It was a pretty good debut too. Yes, it was a bit rough. But every shift out he got a  bit better and by the end of the game he made a couple of plays too. I’m on the same forward line with Josh, along with other newcomer Adam and it’s a lot of fun centering for them. More on this new skater as the weekend continues…