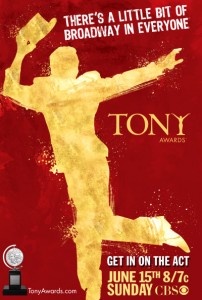 It’s been a great Broadway season. We’ve saw more shows this season than in the past couple because there was so much great stuff to see. Tonight’s Tony Awards should be very exciting to watch.

Yes, there are production numbers from the eight nominated musicals: Passing Strange, In the Heights, Xanadu, Cry-Baby, Grease, Gypsy, South Pacific and Sunday in the Park With George. In addition there’ll be a 10th anniversary performance from The Lion King as well as a tribute to Rent that will feature both the current and original cast (you can imagine how excited I am about that).

Here’s a rundown on my picks in tonight’s major categories:

First the shows:
Best Play: August: Osage County. It’s already won the Pulitzer and it’s a box office smash (not an easy thing for a play to achieve). It’s soon to be a Tony winner too.
Best Revival of a Play: Macbeth. The Shakespeare tragedy has never won a Tony, despite 45 Broadway productions. This show had an acclaimed off-Broadway run at the Brooklyn Academy of Music and then came into Broadway with a stellar cast that included Patrick Stewart in the title role. (Boeing-Boeing won)
Best Musical: In The Heights. This is a tough category. I’d love to see the wickedly smart Xanadu come out on top, but I don’t think that’s meant to be. In The Heights is fresh and exciting and it deserves to take the prize. (South Pacific won.)
Best Revival of a Musical: Gypsy. There’s tough competition here from South Pacific, but this staging of Gypsy, wildly considered to be the best staging of the musical ever, should triumph. (South Pacific won.)
Best Book of A Musical: This is where Xanadu will come out on top. Douglas Carter Beane’s sharp, wildly funny book will win the night. (Passing Strange won.)
Best Score: In the Heights’ Latin infused score should win voters over. Passing Strange‘s rock score is a strong second contender here.

And now the actors:
Leading Actor in a Play: Patrick Stewart in Macbeth. His star turn here will finally earn him a Tony. (Mark Rylance from Boeing-Boeing won.)
Leading Actress in a Play: Amy Morton in August: Osage County. She is at the core of this family drama and will pick up the acting award for her efforts.
Leading Actor in a Musical: Paulo Szot in South Pacific. Making his Broadway debut, opera singer Szot has won critical and audience praise as Emile de Becque.
Leading Actress in a Musical: Patti LuPone in Gypsy. She is nothing short of amazing and I can’t imagine her not winning the Tony.

Post-show update: My predictions weren’t as good this year as last. I only got six of 10 correct. The biggest surprise for me was Passing Strange getting Best Book. I really thought that was going to be Xanadu’s triumph for the night since it’s the book that makes that show work so well.

The Tony telecast itself was smooth and well done this year. All of the numbers for the nominated musicals were great and showcased the shows well, except for Grease which fell flat. It was nice to see airtime given to three shows (The Little Mermaid, A Catered Affair and Young Frankenstein) that received other nominations besides Best Musical or Best Musical revival. Whoopi Goldberg proved to be a good host too. Espeically funny was her dropping into a few musicals: Phantom of the Opera, Spring Awakening and A Chorus Line to name a few.

The clunker of the night–and it pains me to say this–was the tribute to Rent which came at the end of the telecast and really should have blown the roof off Radio City. It was a nice tribute to writer Jonathan Larson. However, by only using a bit of “La Vie Boheme” and “Seasons of Love,” it failed to showcase what made the show so good and so special. In terms of tributes, The Lion King did much better showcasing itself with its amazing “Circle of Life” number, which is one of the most stunning theateritcal moments ever.