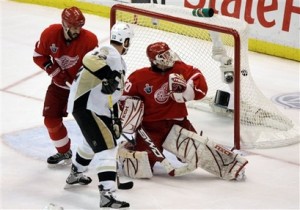 The Stanley Cup was out of its case being polished and then the Pittsburgh Penguins struck back!

Around 5 minutes to go in the third the Detroit Red Wings pulled ahead in game 5. Then with 35 seconds to go, the Penguins got one past goalie Chris Osgood to tie up the game.

Two and a half overtime periods later, the Penguins scored again (picture at left), keeping their Championship hopes alive and forcing the Cup to go back into its case.

The Red Wings fan in me was devastated to see the game end that way. The home crowd was ready to see its team lift the cup. The Penguins fan in me was glad to see the team persevere and extend what has been a fantastic series. I wasn’t, however, as thrilled being up until 1am. The series is back in Pittsburgh Wednesday night. LET’S GO RED WINGS!