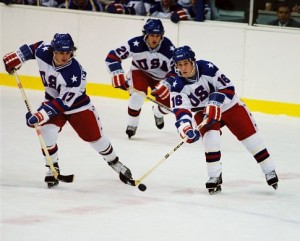 With the finals of the Stanley Cup Playoffs starting up tomorrow and my two favorite teams battling it out for the championship title, this week is the perfect time to roll out my favorite hockey film of all time, Miracle. The movie, released by Disney in 2004, looks at the 1980 USA Olympic Hockey Team, starting with the tryouts and running through the team’s gold medal win at the Lake Placid games.

The film is absolutely stunning. Watching Coach Herb Brooks (played by Kurt Russell) whip his young players into a team is amazing. It’s a lesson in team building. Over the course of months, the players go through an arduous training regime to get them ready for the Olympics. Back in the 70s and 80s hockey was all about the Soviets and no one thought an American team, especially one made up of these players, could go all the way. These guys were facing a major uphill battle.

The training is not easy, hours and hours a day. All the while the group knows they are going to continue to be cut until Brooks has exactly the numbers he needs. He’s not only looking for the best skilled players, but also those who play for the team rather than themselves. The moment they realize exactly what team they play for is one of the movie’s stand sequences.

The hockey games are thrilling to watch. The production team worked hard to exactly recreate the plays of the games leading up the Olympics as well as the Olympic contests. Using the ABC library from the Olympic games, they also have the actual commentary from Jim McKay and Al Michaels (Michaels actually re-recorded his calls to make it sound great in our Dolby Digital 5.1 world).

I remember the actual USA/USSR game, so to see it replayed with such precision and looking laser sharp on film was fantastic. Right before Miracle was released, I got to go to a special pre-screening that was put together for New York City hockey players. I went with a few people from the NYCGHA and we had a great time. To watch the film with other hockey players was very cool.

Anytime I need to get pumped about my own hockey game (even though I will never play like these guys), I pop in and watch the sequence that starts with the first Lake Placid game through the end of the movie. The video clip below is the speech Brooks makes before his team goes out to face the Soviets (after badly loosing to them in a pre-Olympic match). Check it out and see how inspires you.