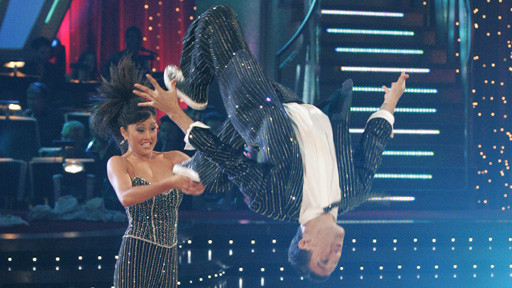 Hard to believe 10 weeks have gone by since the Dancing with the Stars season began. The finals brought mostly dazzling dance with a minimum of clunky performances.

Tonight the dancers did a cha-cha faceoff as well as a freestyle dance. Here’s my perception of the dancers from tonight:

There’s one more dance tomorrow night that the judges will get to score and the viewers won’t. The dancers get to re-do one of their past performances. Not seeing what’s to come, I stand by my original prediction. I think Kristi will find herself with a mirror ball to add to her Olympic medals.

Final Results Update: Congrats to Kristi! She deserved to win for her outstanding performances during the finals, but also for her consistent high scoring dances all season long. It’s really nice to see a woman take home the trophy again (first time since Kelly’s win in season 1). Congrats also to Brandon & Brittany for winning the junior competition, also very deserving (and you know Brandon was freaking out as the Dallas Cowboy Cheerleaders presented the trophy).

Overall the results show was good. It was nice to see everyone dance again. The Usher performances were incredibly good.

It all starts over again in late September. I can’t wait!