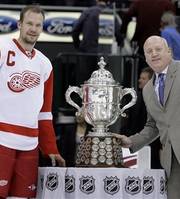 Success! The Detroit Red Wings won the Western Conference Finals last night by defeating Dallas by a solid score of 4-1. It took six games to do it, and Dallas took the beating in their home arena; but now the Red Wings are off to the Stanley Cup Finals for the first time since 2002 (On the left is Detroit Red Wings Captain Nicklas Lidstrom with Bill Daly, deputy commissioner of the NHL, with the Western Conference trophy.)

The Red Wings/Penguins Stanley Cup Finals start Saturday night! The two teams have never been in a finals together, and have not played each other this season thanks to weird NHL rules about cross-divisional play. The past two years that did play against each other and the Red Wings won both. That’s a good omen!