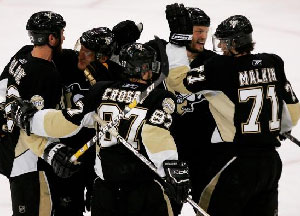 Maybe I jinxed my teams with my Wednesday post about sweeping the conference finals. Detroit and Pittsburgh failed to complete their series on Wednesday and Thursday. Detroit played game 5 yesterday and gave up a second game to Dallas (why, Detroit, why?!?)

This afternoon in the Eastern Conference game 5, Pittsburgh scored a definitive 6-0 win over the Flyers and concluded the series in spectacular fashion. Now, as long as Detroit finishes tomorrow night all will be right with the world.

In the meantime, congrats to the Penguins. I’m looking forward to seeing them in the finals.