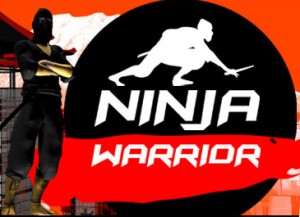 American Gladiators returned this week with some cool new challenges, a new Eliminator course and new gladiators (including the two champions from last season). It was great watching the return and it will provide many weeks of Monday night entertainment.

We’ve got a new Gladiator-esque fascination called Ninja Warrior. It’s on G4 a lot (we tend to catch the 6pm and 6:30pm plays). This is one crazy show. There are four stages to this obstacle course and this is some of the toughest stuff we’ve ever seen.

Usually 100 people start out, going one at a time to get through stage one. There might be five that survive. We’ve seen only one person make it on to stage four and they failed to complete. From what they say, only one person has ever completed the fourth stage. There are people in Japan who seem to spend a great deal of their time training to compete on this show. It’s insane and amazing.

Here’s a clip showing one guy trying to get through the stage three course. Check it out and see what you think.

If you want to get addicted this weekend, there’s a weekend-long marathon in progress. I don’t even want to admit to how much Ninja Warrior we’ve watched today. With the courses always changing, it remains very entertaining as the episodes roll by.