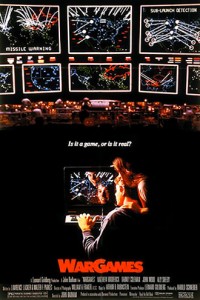 After writing about the kooky computer movie Tron last week, I thought I’d go for the more thrilling computer movie WarGames this week. WarGames hit theaters in 1983, the summer after Tron. And what a difference a year makes.

Where Tron was an unrealistic look at computers; WarGames gave audiences a look at something that was in the realm of possibility. Here a computer savvy high school kid who is trying to break into a game company’s computer to try out their new software. Where he ends up though is inside a computer at NORAD playing war games. Enticed by the now famous “Shall we play a game” phrase, he says sure. What he doesn’t know is he’s just started a countdown that could send missiles over to Russia.

The movie was an excellent mix of drama, thriller and a bit of comedy. The screenplay was nominated for an Oscar, an indication of how solid the story is. (It lost to Tender Mercies that year.)

Today the movie is also a visual computer museum. The high school hacker dials into the Internet (was it even called the Internet in 1983?) via a acoustic coupler modem. Of course, there are no color graphics or slim computers either. The mainframe he’s engaged with at NORAD is the size of an car. Then there is the size of the desktop computer too… compare that to a Mac AirBook!

This was Matthew Broderick’s second big screen feature and came three years before his breakthrough role in Ferris Buller’s Day Off. He’s, of course, very good here and it gave a glimpse of what was to come because there is a bit of Ferris in this character.

I saw this movie in the theaters even more than Tron because it was very cool to see this representation of a boy and his computer. Of course, I didn’t have adventures like this (I didn’t have a modem until around 1990), but it was still a great bit of movie escapism.

Meanwhile, I found out while doing research for this write up, that a sequel was made a couple years ago. WarGames: The Dead Code gets dumped straight to DVD on July 29, the same day the 25th Anniversary DVD of WarGames is released. I watched the trailer and it looks lame. I can’t bring myself to embed the trailer here, but you can watch it by following this link to YouTube.