In The Heights Scores 13 Tony Nominations! 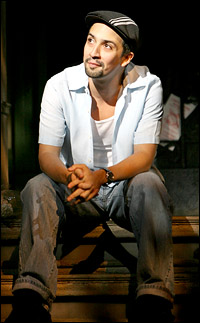 We loved In the Heights when we first saw it back on Valentine’s Day weekend. It is wonderful to see that in this morning’s 2008 Tony Awards Nomination announcement that the show picked up the most nominations with 13.

In the Heights (pictured at left) competes for Best Musical against Cry-Baby, Xanadu and Passing Strange. In a twist that hasn’t happened in a few years, we’ve already seen many of the nominated new musicals. The only one we’ve not see is Passing Strange, which I want to see but Will is less enthused about. Interesting omissions in this category are A Catered Affair, which was a top nominee for one of the critics awards, and Young Frankenstein, this season’s new Mel Brooks musical.

In the play category, it’s no surprise to see Pulitzer winner August: Osage County lead the plays with 7 nominations. That’s still high on our list to see. Other plays looking for a win are Rock n Roll, The Seafarer and 39 Steps (another one we’d like to see).

The Tony Awards are handed out Sunday, June 15 on CBS. I’m sure I’ll have much more to say between now and then about then.