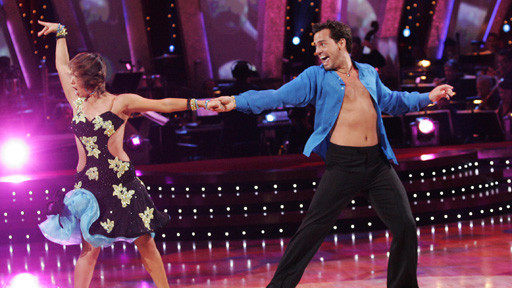 Suddenly nine weeks are gone and we are at the semi-finals. It was a very close competition tonight with some great dances, as well as a surprising clunker. This week each dancer did two dances that they picked out of a mirror ball at random. As has been usual lately, there’s one ballroom and one Latin to do.

Best dances: For Ballroom it goes to Jason for the Foxtrot. For Latin, I’m going to give it to Marissa for the goosebump inducing Rumba.

It pains me to say this, I think Marissa won’t survive into the finals. She’s getting all my votes tonight because I would love to see what she’d bring for a freestyle, but I think this is where she’ll go home because of these four she is the weakest.

Results Show Update: As expected, it was Marissa’s time to go. Next week’s final features Jason, Cristian and Kristi and it should be spectacular. The finals for the junior competition was tonight with three competitors going for the championship. All the couples were fun to watch, but the paso doble from Brandon & Brittany was incredible. The show has just ended so it’s not posted anywhere yet, but if I find it on  You Tube later I will post it. I can’t rave about it enough. The winner for the juniors is also announced next week.