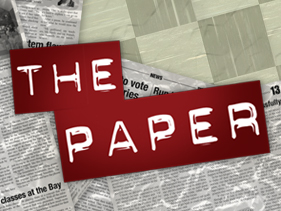 I can’t remember the last time I made an appointment with MTV. It might be nearly 10 years now since I had an interest in what’s going on there. But a squib I read somewhere about the new series The Paper made me tune in, and I have been for four weeks now.

The Paper is a reality show about the staff of Cypress Bay High School’s newspaper, The Circuit. The show’s debut showing the beginning of the school year with the choice being made for who should be editor-in-chief. Talk about drama! There was competition for the job to be sure, and that led to lots of drama. Recently we’ve seen them gather stories for the first issue, including a couple of the guys practicing with the football team so they could write about what the practices are like as well as the paper’s first deadline of the year.

It’s been completely fascinating since, from 1983-1986, I worked on my own high school paper, the Central High School Falcon Flyer. Things were clearly more simple back then as I don’t remember this much drama at all around the newspaper. For all the commotion over editor-in-chief, I don’t think we had any of that. I served in that role as a senior, but I don’t remember drama over getting the title.

On the show, I also don’t think Amanda, the person who is editor of The Circuit is doing her job all that well given what was aired about the paper’s first deadline. Alex, the managing editor (and someone who wanted the EIC job), should actually be in charge from what I’ve seen.

Oh, and I have to say we didn’t have as big of a staff either. I think they said in the opener The Circuit has 30 or 40 people on staff if you count all the writers and sales people. Falcon Flyer had about a dozen staffers. We wrote, edited, laid out and sold the ads. The Circuit also produces a massive paper, this first deadline was 36 pages! I think our largest was 16, and that was around Homecoming.

Anyway, I just wanted to point this show out. You can catch The Paper Monday nights at 10:30 or watch online anytime at thepaper.mtv.com.

And now for a little compare/contrast moment… the 2007-08 lead staff of The Paper and the 1985-86 staff of the Falcon Flyer. Do you supposed we’d look that good if we’d had an MTV photographer shoot us?