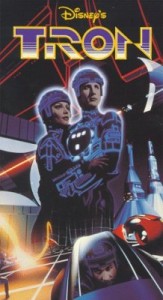 Summer 1982… 26 years ago… one of the huge summer blockbusters was supposed to be Disney’s Tron. Released in July, it was a pretty huge flop, grossing only $33 million domestically. Audiences just weren’t into spending a couple hours of their summer looking at the Dinsey-ized insides of a computer. To my 14-year-old self at the time though, who had a Texas Instruments computer, this movie was pretty much the coolest thing ever!

The story revovled around Jeff Bridges, a star computer programmer who wanted to get back the programs he’d written for a company (industrial espionge, right). To get them back though, he has to be inside the company and the computer, not wanting to be tampered with sucks him inside the CPU turning him into a “program.” Once there, he discovers that the Master Control Program intends to take over the world and he joins up with other programs to destroy the MCP and restore order to the CPU.

Sounds pretty hokey when you write it out like that, doesn’t it.

And yet, I still love this movie, even today with it’s very outdated special effects and lame plot. The 20th Anniversary DVD came out a few years ago and I picked it up happily. Great DVD too with documentaries about how it was filled, why it seemed relevant at the time plus details of the sequel that has never quite gotten off the ground.

I remember there was an awesome arcade video game that was out with the movie too, one that I was pretty good at. The game had four phases: the light cycles, the MCP Cone, the tanks, and the I/O tower. Complete all four and you’d move to the next level and there were 12 levels. I never could get all the way through, but consistently I wouldn’t die until level 9 or 10. If the game had stayed in the arcade, I think I would’ve succeeded but it had a short life like the film did.

For those of you who are not Tron initiated, here is a look at the trailer: