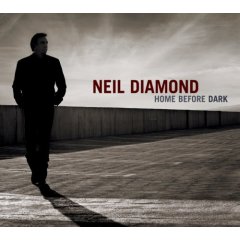 I downloaded Neil Diamond’s new album Home Before Dark first thing yesterday morning and it was great music to play through the day. Neil once again collaborated with Rick Rubin, who worked with Neil on 12 Songs and also worked with Johnny Cash on the last albums that Cash made before he passed away. Their work together has produced another stellar album.

The thing I liked so much about 12 Songs is that it stripped the music down. In the 80s and 90s, Neil Diamond music had become more and more orchestrated and heavily produced. Rubin got him to strip away the glitter and huge production and get back to simple, unplugged music. Home  Before Dark is more of the same with some excellent results. One particular stand out is “Another Day (That Time Forgot),” a duet with Natalie Maines. I’ve never heard of her before, but the duet is excellent. The first single from the album, “Pretty Amazing Grace” has become an instant favorite. The entire album is another stand-out of fine acoustic songs meshed with a voice that is in great form and song writing that has never been better.