Here! Films is now consistently making great gay-themed films. We caught two of the latest on Here! TV this weekend and recommend them both. 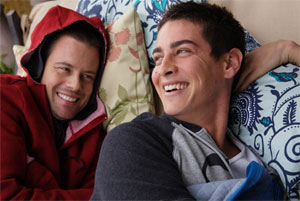 Shelter is a moving drama about a young 20-something who has given up his own dreams to help take care of his nephew because his sister isn’t very good at being a mother. But when he reconnects with his best friend’s older brother, he falls in love and finds the desire to peruse with his dream of becoming an artist.

As the film’s trailer says “Sometimes the life you have isn’t the one you want.” This film focuses hard on the difficulties that happen when people aren’t trying to fulfill their ambitions.

The two at the heart of the film—Trevor Wright (as the aspiring artist Zack) and Brad Rowe (as Shawn, the guy who gets Zack back on the right track)—are great in their roles. They give this film a lot of depth and emotion. It’s the best gay love story film I’ve seen in a while… and what’s makes it even better is there’s a lot more going on than just a love story. Here’s the trailer: 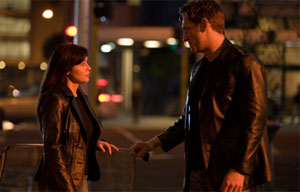 Kiss Me Deadly is a spy film. Robert Gant (best known from Queer as Folk on Showtime) plays Jacob Keane, a former spy who gave up that life after the cold war. Now, decades later, a former colleague, Marta (played by 90210’s Shannen Doherty) calls because she’s in trouble. Jacob leaves his boyfriend and daughter to go help and soon finds himself in deep as a rouge spy tries to get information from him and Marta.

This was a fun, light, spy thriller. It’s not James Bond or Alias, but it had a solid plot and good acting. Here! is planning on making a series of movies around the Jacob Keane character, so it was good to see such a solid start. Here’s the trailer (which was made back when the film was called The Delphi Effect):

If you don’t have Here! on your cable or satellite system, watch for the films to come out on DVD. Shelter comes out on May 27. Kiss Me Deadly will follow later this summer.