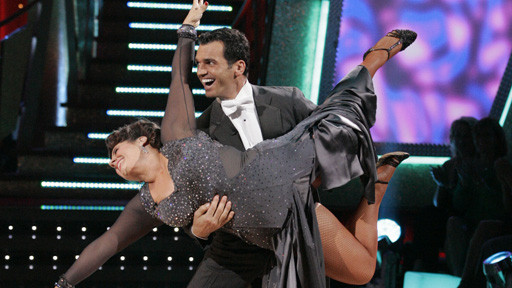 It was another two dance night with the competitors just a week away from the semi-finals. The ballroom looked great, but the Latin had nearly everyone a little bit off. This week is also the first time in any season that the competitors have been allowed to do lifts before the freestyle.

Best dances: For Ballroom it goes to Jason for the Tango. In Latin it’s Cristian. For the bottom two… another tough call. I’m going with Marissa and Mario. Going home: I fear for Melissa since she’s bottom of the leader board, but she’s been saved before and I saw want her in the semis next week. I’m going to go with (and cross my fingers) for it to be Mario that everyone has grown tired of.

Results Show Update: YAY MARISSA! Safe! It was so awesome that she was announced as safe in the first round of elimination. I clapped. I did get it right that Mario was the one to go. Not sure if I nailed the bottom two though because they were cautious to say with Jason and Mario standing together at the end that they were not necessarily the bottom two.

It was a great celebration for the 100 episodes tonight. The top 10 dances show at 8 was great, except the stuck in Kelly Monoco’s dance that was scored a 10 and shouldn’t have been. The rest of the dances were good choices. The actual results show was jammed packed. It was awesome to see Mario Lopez and the cast of A Chorus Line do two of the show’s iconic numbers. The Rascal Flats performances with Apollo & Julianne and Mel & Maks were both wonderful (although I wondered if Mel & Maks missed a cue somewhere because they didn’t dance in the first chorus which is the usual pattern).