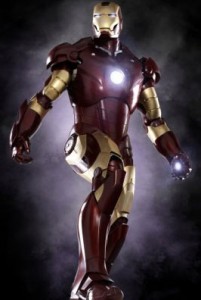 May Movie Mania got underway today with Iron Man. Marvel has had quite a good track record in the past few summers, claiming summer success with Spider-Man, X-Men and Fantastic Four movies. Iron Man stands well along side the first installments of Spider-Man and X-Men as a solid introduction to a favorite comic book character.

The movie is even fat better than its trailers. The previews don’t give much insight to how well the film is plotted and paced. That it’s pacing is so good is rather surprising. I admit I didn’t expect such a strong showing from director Jon Favreau. I like him as an actor, but he doesn’t have the largest resume as a director and has never taken on a movie like this (his previous credits include Zathura and Elf).

Robert Downey Jr. is great as Tony Stark, billionaire playboy and CEO who thinks his company is working to make world more peaceful by manufacturing weapons. After a botched attempt on his life, he realizes that his company isn’t the best world citizen. He initially becomes Iron Man to escape his captors and then takes his idea for the suit to the next level to right the wrongs he’s discovered. 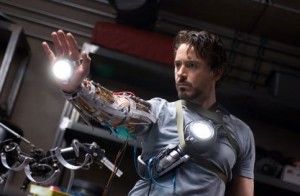 The supporting cast is beyond good, and was really not highlighted to the fullest degree in the trailers either. Gwyneth Paltrow is Pepper Potts, Stark’s faithful and courageous assistant. Jeff Bridges is Stark’s right hand man in Stark Industries. Terrence Howard is Stark’s childhood friend who his now his military liaison. How many superhero movies come with this many Academy Award nominees and winners (Paltrow and Bridges are both winners)?

The plot is engaging, and you can imagine it being ripped from today’s headlines. As many government contracts as there are funding our current war, you can easily fathom a company arming both sides in the conflict as a way to expand profits. Imagine too what would happen if someone tried to put a stop to it and the struggle that might ensue. I think that’s what gives the movie such a strong core because it strongly mirrors things going on in the world today.

I imagine this will become another film series from Marvel Studios. Hopefully they’ve signed the cast for a couple more along with strong scriptwriters (we’ve certainly seen how series can go amiss like the third Spider-Man and the third X-Men).

A special find in this movie as well… Jim Cramer, host of CNBC’s Mad Money shows up in the film doing a Mad Money segment on Stark Industires. Cramer is also co-founder of TheStreet.com, the parent of the company I work for, Promotions.com. It was kinda fun to see him turn up on the big screen.

Next week May Movie Mania continues with Speed Racer!