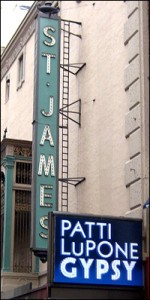 As part of our anniversary week of shows, this afternoon we took in the latest revival of Gypsy starring Patti LuPone, Laura Benanti and Boyd Gaines. It was an excellent way to spend the afternoon. As Will put it during intermission, this show is “pretty f***ing brilliant!”

This is our second Gypsy since we came to New York City (and the third Broadway version since 1989). Back in 2003-04, Bernadette Peters, Tammy Blanchard and John Dossett led a production. It was a good and certainly a quite different turn for Peters. She was great as Rose and put a different spin on the character than was typical. The revival only lasted a year though.

This production though is something special. It’s a career defining role for LuPone, who, of course, has already defined her career once playing the title role in Evita nearly 30 years ago. Now she is amazing as domineering stage mother Rose. She plays the strength and vulnerability to perfection as Rose struggles to make her children into stars, even if it’s not what they want.

The supporting cast of Laura Benanti, as Louise (who becomes Gypsy Rose Lee), and Boyd Gaines, as Herbie, give LuPone the ideal foils. Benanti truly transforms once she’s out from under her mother’s grip (it’s riveting watching her morph the longer she sings “Let Me Entertain You” in Act 2). Gaines too is the portrait of man who loves this woman but can’t stay with her because of her drive to make her daughters stars. 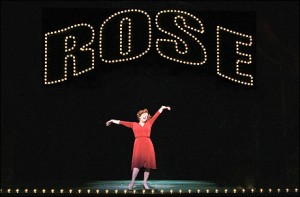 But, the show all comes back to LuPone. The closing number, “Rose’s Turn,” is always what Roses are judged by. LuPone sings it unlike anyone else. The raw emotion as she sings of the life she could’ve had, and possibly deserved, is heartbreaking. Of course, LuPone’s has a great voice and it soars throughout this production, but this final number brings it all together. This is not LuPone’s first go at Rose. She did it outside New York and last summer performed it as part of the inaugural season of City Center’s Encores! Summer Stars (it’s that production that has made the transfer to Broadway).

This revival is directed by Arthur Laurents, who also wrote the show’s book. Laurents also directed the acclaimed 1989 revival with Tyne Daly. (Laurents is scheduled to direct a revival of West Side Story later this year and we can’t wait to see what he does with that.) The other major plus of this production is its use of all of Jerome Robbins’ choreography. The Peters revival used some of Robbins’ steps and others from Jerry Mitchell. Robbins not only choreographed the original production, but he also directed it. It’s nice to Laurents bring those moves back to the stage (just like he did in the ’89 revival).

With awards season here, this show and its stars are bound to rack up. It’s already received four Drama Desk nominations and six Outer Critics nominations. Tony nominations are announced on May 13and I expect to see four to six nods for Gypsy.