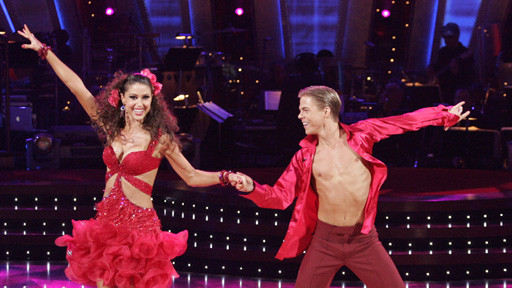 Quite the night in the Dancing with the Stars ballroom! Everyone had to do a ballroom and a Latin dance this week so everyone was working hard. For Crisitan it was a little two hard as he pulled a muscle midway through his samba and ended up going to the hospital.

Best dances: For Ballroom it goes to Jason and the Quickstep (as noted above). In Latin I go with Kristi. For the bottom two… it’s hard this week. I thought Mario was weak and since he was bottom two last week I’ll go with him. I also think Cristian will be there because he had such low judges scores. Going home: I’m actually going to pick Mario because I just don’t think Cristian will be sent home on a week that he got injured.

Results show update: Ouch! Much sadness as there will be no more shirtless Derek. The voters spoke and sent Shannon and Derek packing. It’s a shame since she did so good last night. I completely blew the predictions across the board with Shannon and Marissa ending up in bottom two. It’s going to be so hard from here since everyone is dancing so well. Rest of the show was good. Who knew you could paso doble to “Pour Some Sugar On Me”!?! I’m glad Cristian will be able to continue. Hopefully he will not hurt himself more. The fact he’s continuing AND needs surgery seems dangerous to me. Next week DWTS celebrates show 100 on Tuesday night. Yay!