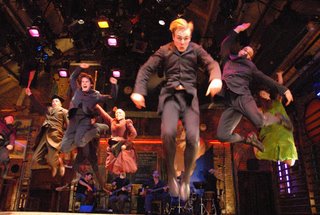 We finally took in last year’s Tony Winning Best Musical, Spring Awakening, this afternoon. For me it was a fantastic afternoon of theatre. I loved every minute. Will was not as impressed saying the show was pointless (he felt the characters had no goals to make the audience care about them). I did not agree. The story was a slice of life for these teens in 1891 Germany, although it might as well be 2008 teens for all of the angst and troubles they encounter.

The six guys and six girls are all troubled by something: one has a parent who beats her, another can’t get the real story about where babies come from, one is flunking out, one is in lust with his piano teacher, everyone feels their hormones raging. There are major consequences though as the one flunking out can’t face his parents or teachers, and the girl who doesn’t know what makes a baby soon is pregnant. 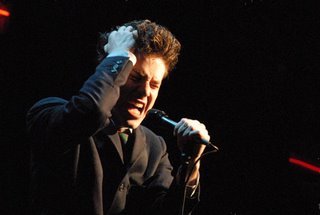 The music punches up the emotions. I’ve had the cast recording since it came out in late 2006 and it has never left my ipod. Every song is awesome. To see it all performed live and really get the full impact of the plot was fantastic. Duncan Sheik (remember the song “Barely Breathing”…that’s Duncan Sheik) composed the beautiful music with the lyrics and the show’s book written by Steven Sater. These two, in my opinion, constructed the best rock musical since Rent.

Seeing it all play out on stage brought on a Rent-sized emotional meltdown for me. The final song, “The Song of Purple Summer,” can give me goosebumps anytime it comes up on my ipod. To hear it live, with all the emotional upheaval of the second act, gave the show the perfect emotional crescendo.

Also a treat for me was finding that Matt Doyle was in for Melchior this afternoon. I’ve become a fan of Doyle’s because of the Bare recording I got a few months ago. He’s excellent on the CD, and it was great to see him center stage today giving a fantastic performance (he’s Melchior’s understudy and is always in the show’s ensemble).

Here are a couple of Spring Awakening bits for you. First up, their Tony Award performance from last June. It features three songs: “Mama Who Bore Me,” “The Bitch of Living” and a sanitized-for-TV-version of “Totally F**ked.” The second video is the show’s official preview reel. Enjoy!