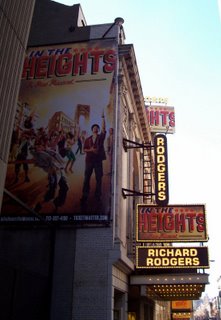 It was a fantastic afternoon seeing In the Heights, a new-to-Broadway show that just began previews Thursday night. The show, which played a critically acclaimed off-Broadway run last summer, vibrates with a fantastic energy from start to finish and is infused with great Latin rhythms and dance. The show takes place on a street corner in Washington Heights, which is just about as far north as you can get in Manhattan and still be in Manhattan (we’re talking 181st Street). There’s a car service, a bodega and a hair salon and the people that run these places all live on the block.

These are all working-class people, running their own businesses and providing for their families as best they can. A developer is trying to buy out businesses. A daughter has come home after loosing her Stanford scholarship. People are trying to fall in love. Some are trying to get out of the neighborhood for “a better life.” Everyone has dreams. To add some twists into the plot, someone has just won $96,000 in the lotto and there’s a blackout. It all meshes together in a show that is one of the best original productions I’ve seen in a long time. You can check out a couple of the songs on the In the Heights website. 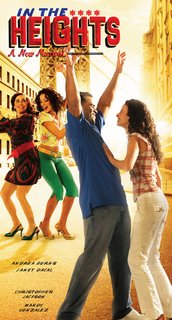 The cast is fantastic, with a mix of newcomers and some favorites too. Priscilla Lopez, the original Diana in A Chorus Line, is sensational as the mother of the girl who lost her scholarship. Robin De Jesus, a co-star of Geek Out favorite Camp, plays the cousin of the bodega owner. And Mandy Gonzalez, who we last saw in the campy clunker Dance of the Vampires, really gets to show off her talents as the daughter who comes home from college in disgrace.

The true find of the show though is Lin-Manuel Miranda who not only plays the bodega owner but conceived the show seven years ago while he was still in college and wrote the music and lyrics. He is amazing as the fast rapping guy who is too shy to ask a girl out but is strong willed enough to know he needs to help keep the neighborhood together.

The show did really well in the off-Broadway awards last year and will no doubt clean up in Tony Award nominations this coming May (and likely quite a few awards too in June). It’s one of the few shows this year that is not based on a film and, as I said, it refreshingly original. We highly recommend it.