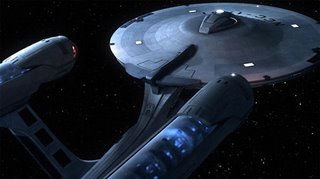 Word came today that Paramount is delaying the new Star Trek film until May 2009. At the same time they say nothing is wrong with the film (as in it doesn’t need rewrites, or more time in post-production or anything like that), they merely feel it will gross more money in the summer rather than over the holidays and that the writer’s strike that just ended left holes in its release schedule next year.

I hope that’s all true. For all of the movies that get moved around the schedule, rarely does it turn out like Titanic (delayed mostly to complete its special effects) where you get a solid film. More often the delays mean something is wrong… and usually that something doesn’t get fixed well.

It’s too bad, the teaser trailer with Cloverfield was really enticing… now we have to wait more than a year for the result.