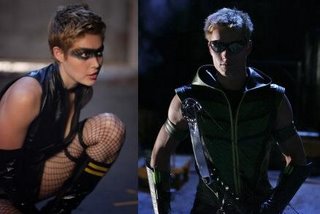 Personally, I’ve been a little underwhelmed by the current season of Smallville. From the indroduction of Michael Cassidy as Lex’s test-tube brother to Laura Vandervoot’s Supergirl, the storylines have been all over the place this year. Don’t even get me started on Lana’s return from the dead only to get all “I must have vengance” on Lex. But tonight’s episode looks to be rather promising with the introduction of Alaina Huffman as the fishnet-wearing JLA member Black Canary. If anything, Huffman’s appearance means we’ll get to see more of hottie Justin Hartley as Canary’s signifigant other, the Green Arrow.