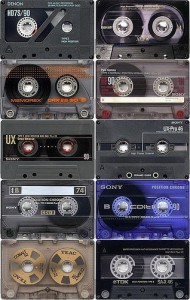 I’ve been pondering mix tapes over the past couple weeks thanks to a two different events. First, in Barnes & Noble two weeks ago I happened on a book called Love Is a Mix Tape: Life and Loss, One Song at a Time by Rob Sheffield. The memoir chronicles the courtship, marriage and sudden death of Sheffield’s wife. Sheffield, a music critic for Rolling Stone, writes about all of this using mix tapes he’d made as a reference point for their relationship. I haven’t read this book yet (haven’t even bought it yet), but it’s stuck in my head and is a book I will pick up.

The other reference to mix tapes comes from an odd place: this past week’s episode of Food Network’s Ace of Cakes. The crew was making a cake for an independent record store and there was a brief discussion about mix tapes and how they just don’t exist anymore.

I remember in high school and college making loads of mix tapes. The mix tape obsession started when I got a car when I was 16. Of course, I needed tapes to listen to because I wanted control of my music. I took great care to fashion just the right mixes–transitioning from fast to slow songs, finding the right mood. But I also liked to work on the fly, never really planning a mix out in advance. Part of the fun was to have the next song picked before the current one had finished playing. By the time I was a freshman in college I even had a mixing board so I could lose the silence between songs and just build one long mix. I would often have as many as a dozen different mix tapes in the car and I’d change them out pretty routinely.

Tunes in the car changed when I headed for California in 1993. One of my going away presents from some friends was a Discman that could play over the car stereo using a cassette adapter. Of course now I could play whole CDs plus still have mix tapes. So it was the best of both worlds.

I remember doing a mix tape for Will too, very early in our relationship. I remember he loved the gesture of the tape (and it does sound clichéd now, 12 years later, to give a mix tape). The tape did point out where some of our differences in music were. I don’t remember exactly what was on that tape now, but I know he was not a fan of at least a fourth of what I put on there.

For a while I was doing mix CDs too. Around 1999 I was exposed to CD recording because of work. I ditched tapes around that time and started doing mix CDs. It was great to have the digital format to work with. With the shuffle technology of the CD, the mix could be just a bit different each time. Of course, this was the first blow to the essance of the mix tape that was set in stone until you erased it to start over.

The mix tape/CD hit the death knell for me around 2002 though because I got my first MP3 player. Now I could have hundreds of songs with me at any given point and build playlists. Even though I tended to work on the fly when making the mix tapes, this was a whole new freedom. Today, I don’t even really mess with playlists on my ipod. There are some there, mostly broken by genre and only existing really to help me manage the tunes a bit. I basically leave it on shuffle on let it rotate between the 850+ songs that are on there. You can image some of the odd mixes that happen: from a High School Musical song to something from Pink Floyd’s The Wall to Barbra Streisand “Prisoner” and into Pearl Jam’s “Jeremy.” My ipod can be a very whacky place…and this is not how I would have engineered a mix tape… it’s truly random. Yes, I worked on the fly, but I was not quite that random about it.

So what’s the point of this diatribe? I’m wondering if we are better off in this MP3/ipod world. Are we missing something because the artistry of the mix tape (or even the mix CD) is slipping away because of new technology? I’m just not sure. What do you blog readers think?