Friday Geek Out: The Last 5 Years 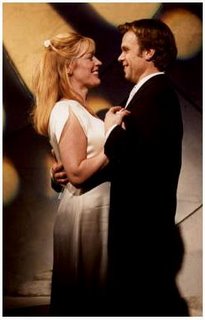 The Last 5 Years made its off-Broadway debut in March 2002 and played a limited run for a couple of months, during which time I saw it twice. Despite it’s short time in New York, it became one of my favorite musicals because of it’s superb music and cast along with it’s unique storytelling method.

The musical is the story of the five year relationship between Jamie (an aspiring novelist) and Cathy (an aspiring actress), from the first date to their divorce. The trick here is that the show starts with Cathy at the end of the relationship and Jamie at the beginning. As the show progresses, their timelines cross in the middle for their wedding where they sing the show’s only duet. Otherwise the show moves back and forth between them in a series of sung soliloquies that give a look into their relationship from one person’s point of view.

Jason Robert Brown wrote the show, based loosely on his own marriage. Apparently it hit a little too close to home because his ex-wife threatened to sue over the content, which was tweaked a bit before it opened. Brown writes some of the best music and lyrics around, having won a Tony for 1999’s Parade. Brown picked up several award nominations for L5Y and won Drama Desk Awards for both music and lyrics. The show’s cast was amazing and we follow each of their works still. Norbert Leo Butz went on to Broadway to star in the ill-fated Harry Connick Jr. musical Thou Shalt Not and then to hit shows liked Wicked and Dirty Rotten Scoundrels (which won him a Tony). He’s currently in Mark Twain’s Is He Dead. Sherie René Scott was in the original cast of Aida before she did L5Y and then also turned up in Scoundrels with Butz. Currently she’s starring as Ursula in Disney’s Broadway version of The Little Mermaid.

Happily Butz and Scott did a cast recording that preserves this show. Click “play” below to hear “The Last 10 Minutes,” which is the song where they come together for their wedding. You’ll hear the timeslines cross as they start to sing together and then come apart towards the end as Jamie moves on to the end of their relationship and Cathy heads for the beginning.