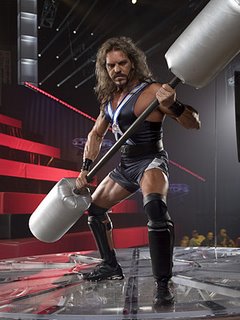 I’ve written in the past about how I’d gotten into the ESPN Classic reruns of American Gladiators. It’s fun seeing those shows again after so many years, with some of the episodes being nearly 20 years old (oh my, how the hair was back then!). Well, I just finished watching the first episode of NBC’s all new American Gladiators and that was awesome fun! It’s the same show, but amped up and clearly with a higher production budget.

They’ve got some of the classic games like Joust, Pyramid, Hang Tough and Power Ball. But, some of these have changed up a bit. Take Joust, for example… instead of getting knocked off a platform to a squishy mat, now you get knocked into a pool of water. There’s some new stuff too, like Hit and Run where the contender has to run back and forth across a narrow bridge while dodging large 100-pound blockers being thrown by the Gladiators. And, the new Eliminator course, which the contenders have to get through to win, is insane! It makes the old show look like a simple theme park ride. The four contenders I saw go through the course all looked like they were ready to collapse as they completed it.

The new Gladiators are great too. They’ve got the same over-the-top attitudes as their 80s counterparts, but their costumes are a more sleek and modern. Plus some of them, such as Wolf (shown above), have some great bits to go with their names. This guy obviously looks wolfish, plus he howls all the time. It makes for some great TV.