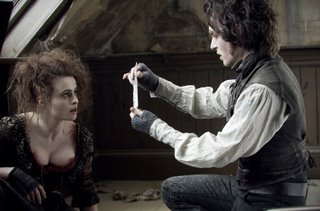 Up front, let me say I don’t have a lot of baggage with Sweeney Todd. I saw the Broadway production when it aired on PBS in 1982, featuring Angela Landsbury and George Hearn and I liked it well enough though. In 2006, I saw, in person, the Broadway revival with Patti LuPone and Michael Cerveris and loved this stripped down version with minimalistic staging and the actors playing all the musical instruments. I don’t own any full copies of a cast recording, but do have a three or four songs from the revival CD. So, given all that, I approach the Sweeney Todd film with few preconceived notions (different from the stage-to-film transfers of shows like Rent, Hairspray or Phantom of the Opera that I know well.)

I thought this film was very good. Tim Burton was an ideal director to tackle this dark, gruesome tale of a barber out for revenge for being falsely imprisoned and taken away from his family. Johnny Depp sings the difficult Stephen Sondhiem songs quite well, and seems to get in better voice as Todd goes more insane. Helena Bonham Carter was fun as the trippy pie maker Mrs. Lovett. Both of these actors do a solid job with their complex characters, allowing the audience to feel for them even while they are doing such sinister things. And the movie looked great, although quite gory as Burton allowed lots—and I do mean lots—of blood to spill.

I know, from what I’ve read, that the score got trimmed down and some of the plot lines truncated, but having only seen the show twice the cuts weren’t that obvious to me. The exception to that being the elimination of “The Ballad of Sweeney Todd,” which seemed like an odd cut since it could’ve played over the opening or closing credits (and to be fair it does play over the credits, but not with its lyrics).

If you want a good but dark and bloody film, “attend the tale of Sweeney Todd.”