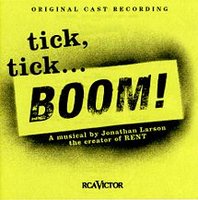 Before Jonathan Larson wrote Rent, he had written other works that had been tried out off- off-Broadway, including a one man show that chronicled his efforts to actually write a show. In 2001, David Auburn (writer of the Pulitzer Prize winning play Proof) adapted the one man show, turning it into a three-person play called Tick, Tick… BOOM!. TTB focuses on composer Jonathan, who is coming up on his 30th Birthday, struggling with the fact that after years of writing music he’s still waiting tables while his other friends have gone on to get “real jobs.” He’s also just learned that his best friend has AIDS, and his girlfriend has let him know that she’d like to leave New York City for a life in the suburbs.

I caught this show twice during it’s off-Broadway run in 2001 and was blown away by it. Many of Rent’s themes show up here—the importance of friends, the struggle of AIDS, finding and pursuing what you’re supposed to do with your life. The show is built with some powerful songs too that give more of a glimpse into what Larson might have contributed to musical theatre had he lived longer.

As we head into 2008 next week, I picked the clip below to gives not only a glimpse into the excellence of TTB, but listen to the lyrics of “Louder Than Words” and see if you don’t think it’s relevant to state of the world today.