We took in a show for the holiday weekend, venturing off-Broadway to see Die Mommie Die!. Charles Busch wrote and stars in this show that is billed as a “riotous comedy-thriller.” We saw the film version of this play back in 2003 and we loved it. The play made it’s New York debut earlier this fall and it’s been on our list to see.

The show did not disappoint. It was a treat to see Busch on stage. We’ve loved his drag personas on screen—in both the DMD! movie and Psycho Beach Party—and to see him play Angela Arden from the second row was a blast. His comic timing is right on and he has surrounded himself with a great cast who are all up to the challenge to play this melodramatic thriller.

The show is a crazy, fast-paced (nearly farcical) murder caper. Has Angela killed her husband and her housekeeper? Her children think so. But, a bigger question, is Angela even Angela? She hasn’t been right since her twin sister died years ago. Angela went from star to washed up nearly overnight. For years it was thought she never recovered from the trauma of the suicide of her twin. And what of the tennis pro/actor who seems to be having a fling with Angela, her daughter and her son!?! I have to say I was skeptical that the melodrama of the film could be sustained on the stage, but it was and we were both in stitches the entire time. 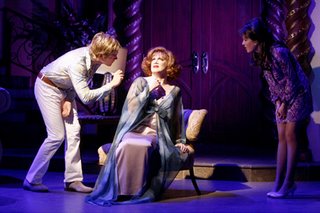 As I said, the whole show is excellent, but two bits stand out. There’s a moment when Angela throws scissors at her daughter who is making accusations. Busch seems to throw the scissors (and then hides them) just as Ashley Morris, the actress playing the daughter, pulls them from somewhere and presses them to her face. It was split-second perfect timing and hysterical!

The second perfect moment is how the kids coerce the confession out of their mother. Since the show is set in 1967, the answer (of course) is LSD! They drug their mother after dinner and, with the stage awash in swirled, multi-colored lighting, they guide their mother through a morass of memories to get at the truth behind years of lies. It is too funny!

Soap fans reading this might recognize the blond guy playing the son. That’s Van Hansis from As The World Turns. He’s doing double duty shooting his role as recently out-of-the-closet Luke (one half of the Nuke duo) and doing this over the top role as well. As we were leaving the theatre, Van was at the exit collecting for Broadway Cares/Equity Fights AIDS and this older woman came up to him, dropped some cash in his bucket, and said it was great to see him up and walking!

If you want to see more from the show, you can check out the Die Mommie Die! website. They have several video clips right on the home page to watch (I just can’t embed them here). Meanwhile, below is the movie trailer, which also gives you a taste of the hilarity!