The God Box by Alex Sanchez

I’ve been a fan of Alex Sanchez since Rainbow Boys was published in 2001 and have read every book since. His just published The God Box is his best work yet.

Paul is a high school senior. He loves God and is devoted to his faith. He has close friends who share his faith. He has a girlfriend he has known for years. Life is good… until Manuel shows up in homeroom one day. Manuel is openly gay, the first openly gay person the students in this small Texas school have known. Paul is drawn to, and yet repelled by, Manuel, who is also a faithful Christian. Paul has a hard time reconciling what he’s learned for years (Being gay is a sin. All gays go to hell.) with Manuel’s interpretation of the Bible’s events. 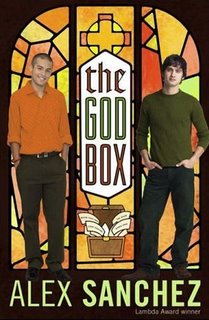 Beyond his faith evolving, Paul must deal with feelings he’s tried to bury for years. Manuel scares him. Paul finds himself more attracted to Manuel and he knows he needs to be truthful to his girlfriend and his father but it is scary because he sees how Manuel is treated at school.

Sanchez writes these characters so true to life. The angst Paul feels as he tries to get comfortable in his own skin is something every teen goes through. Manuel is the perfect contrast since he already knows who he is and he pushes Paul to embrace who he really is too. The other characters are a slice of high school life. There are the people who believe they are absolutely right and invoking God’s name as they make Manuel’s life difficult. There are those who oppose the bashers, trying to make their school a safe haven for everyone.

More than just you’re usual high school drama, this book digs deep into religion too, deconstructing the Bible passages so often used against gays by showing how some scholars feel the religious right often misinterprets passages. Most importantly, the final message is that people and situations should be approached from a place of love rather than hate (certainly a message that needs to be heard often these days).

As someone who hid from their true identity throughout high school and college, this book really moved me. I suspect it will help many find their way towards accepting themselves.

Next up: When You Don’t See Me by Timothy James Beck.