A Strike Here, A Strike There 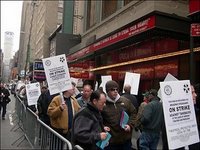 New York has got two strikes going right now. The Writers’ Guild continues on strike. On Saturday, Broadway stagehands walked out on their jobs leaving all but eight Broadway shows dark (on the left is the stagehands picketing How the Grinch Stole Christmas yesterday morning… which is probably what the children were thinking when they showed up for the 11am performance).

I’m not usually much of a union supporter, but the WGA strike makes complete sense. It’s insane that producers pay residuals on some forms of media but not others. To me, it’s pretty clear cut: if a work is sold (DVD, iTunes, etc.) or has ads sold in it (TV, network streaming sites, etc.), then the writer has a right to the residuals. And in this day when DVD is so prevalent (and clearly no longer an emerging technology), that writers only get 4 cents per DVD sold is crazy. Will posted a great educational video earlier this week outlining the writers’ issues. There are also some great blogs out there to follow the strike and its effects: United Hollywood is run by a group of strike captains on both coasts and the LA Times is running a great blog about what’s going on with both sides of the strike line.

The stagehands walkout, on the other hand, is one that I don’t support. At the center of it is the fact that producers are forced by the union to hire more workers than they need to actually do required work. That makes no sense. While the stagehands union rightfully points out that Broadway makes millions, they don’t mention that so many shows struggle to break even (and it can take a year or more to actually make a profit). I can’t think of many lines of work where employers are forced to hire more people than they need. Kudos to the stagehands, however; they timed their walk out at the point to get the most attention, just a week before Thanksgiving. Pressure will be on to get this settled and settled fast (the last Broadway walkout, with the musicians in 2003 settled in four days). Hopefully it will be equitable for everyone.