Sex and the City brings snow!

It’s one of those days you kick yourself for not having your camera. It’s still sitting on the desk from when I did the download for the new headers on Sunday.

Where it needs to be is with me because I’m standing on 6th Ave and 41st street looking at the fake snow the crew of the Sex and the City as dumped at the entrance to Bryant Park (yes, this is live blogging via Blackberry, so if things are mis-spelled please forgive). Actually, I call it fake snow, it looked and felt pretty real… I think they must have had a snow machine out here earlier. Anyway, the crew is shooting some scenes in a tent made up for Mercedes-Benz Fashion Week that will play a part in the movie.

I got some glimpses of the cast and the setup. Carrie runs down the stairs at the 41st street park entrance wearing only a poofy looking greyish-white dress. Miranda, Charlotte and Samantha come right behind her, albeit dressed for the “wintry” weather. There were also some people on the stairs protesting fur. I couldn’t hear any of the dialogue so I have no idea what was going on.

The crew was cool, they weren’t really stressing over the crowds… just trying to keep people moving along. It was a nice way to spend a moment of lunch time. If I find any pics of today’s shoot online I’ll link up to them.

I’ll be honest, I’m not sure what was more exciting, checking out the film shoot, seeing the stars in action or seeing some snow on the ground (I even got to walk though some of it, so I have Sex and the City snow on my shoes!). 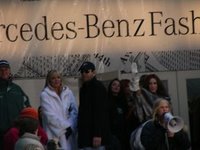 Wednesday Update: I found a photo on the Sex and the City Movie Blog, a blog not officially associated with the film, but one that has been tracking the location shoots around the city. Someone named Neal posted it to that blog, so I’m borrowing it for mine just so you can catch a little glimpse of what I saw in person yesterday. I walked by the park again today (with camera), but they weren’t there and the entire tent setup was gone. What was left was a bit of the snow though. It’s been cold enough to keep just a bit of the packed snow from melting.