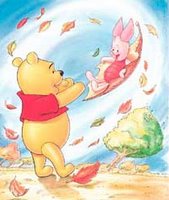 Has anyone seen a flying Piglet? It’s been crazy windy today as the remnants of Hurricane Noel came near us. We didn’t get any rain in the city, although Long Island did. But we got some pretty amazing wind today. With the temperature only in the mid-40s to low-50s there was some windchill in the air.

It was windy all over the city, but at it’s worst of course right here by home. Living just off the Hudson River as we do, this is the first blast of winteritme-esque wind we’ve had this season forcing us into winter hats and heavier coats. It’s great (or at least me who likes the cold thinks so). 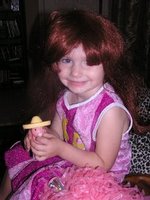 Halloween Recap: Halloween was a pretty low key event as ever, but I did see some interesting things around. It was a beautiful day Wednesday so lots of people were out-and-about in there costumed finery. At Bryant Park’s skating rink, Spider Man was skating with some non-costumed friends. Meanwhile, having a coffee outside the New York Public Library with someone was Freddy Kruger, sans his claws.

Meanwhile, as I walked across 22nd Street (through the Chelsea area from 8th Ave to 10th Ave) around 7:00 there were lots of kids out on those two blocks. Many of the brownstones were decorated and people were having a great time. It was good to see. I haven’t seen many trick-or-treaters around in the years we’ve lived in New York, so it was fun to see something right out of my own childhood.

And, in the containing look at Rufus’ trip to Alabama for Halloween came the official picture of Sydney in her Kim Possible cheerleader costume with Rufus. Here’s more of a look at Halloween from Sydneys’ family.

Fixing Heroes: I’m just about fed up with Heroes. There’s not much of an overall story; instead there seem to be about half-dozen things in play right now. Unfortunately, some of those things are down right boring. I started speeding over Hiro’s Adventures in Japan because I just don’t care. The show needs to get back on track soon or soon I will be over Heroes like I got over Lost.

Book Groups Online: My friend Ilio turned me on to a new website this week called Shelfari. It’s a site where you can share books you’ve read and are getting ready to read (by appropriately putting them on your bookshelf). You can also join an array of groups and talk about all kinds of books with others. It’s a pretty cool site from what I’ve seen so far. You can check out my bookshelf and even become my Shelfari friend if you’re inclined.