Friday Geek Out: The Wild Party 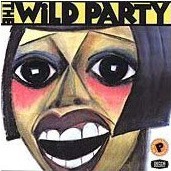 “Queenie was a blonde and her age stood still / And she danced twice a day in vaudeville.”

Thus opened one of two version of The Wild Party that graced New York City stages in spring of 2000. Both versions were musicals and based on a poem by Joseph Moncure March that was banned for being too racy when it was originally published in 1928. Manhattan Theatre Club mounted an off-Broadway production starring Idina Menzel and Taye Diggs and written by Andrew Lippa.

Today I’m Geeking Out over the Broadway version written by Michael John LaChiusa and starring Toni Collette, Mandy Patinkin and Eartha Kitt. Both versions of the show, and the poem for that matter, opened with the lines above. And both told the same story of Queenie, Burrs and their circle of vaudeville friends. All were desperate characters with fluid sexuality, dubious moral fiber and were more than happy to spend the evening drowning in booze.

The general theatre going audience didn’t much care for this. The Broadway version only ran from April to June and the Off-Broadway Party didn’t fare much better. Tastes were already starting to change on Broadway, away from darker musicals and more towards lighter-fare. Shows like Parade and Marie Christine were also victims of this trend.

This was a show that I loved though because of it’s dark vibe. The cast of Collette, Patinkin and Kitt was amazing, as were there supporting players, which included Marc Kudisch (a long time Broadway favorite). The music in this show was also riveting. Even during the non-singing parts of the show, the edgy music was always thumping away in the background lending an almost foreboding feeling to the intermission-less show.

The Wild Party was nominated for seven Tonys in 2000, including the show as well as the three principal cast members. Sadly, in won none, which helped seal its fate.

Enjoy this Tony Awards performance from the cast, which shows off Collette’s voice (really, who knew she could sing before this?) and that Kitt is still amazing.

Geek Out Update: Back on October 5, I Geeked Out about Dance of the Vampires and talked about how Jim Steinman culled parts of the score from some of his other works. Well, Will uncovered another one just this week. He was watching The Shadow and over the end credits was Taylor Dayne singing “Original Sin.” We found the video on YouTube, sadly I can’t embed it here, so you’re going to have to click here to check it out. It’s got all the trademarks of a Steinman video: strobe lights, flowing fabrics and wind machines in full force. And, speaking of Eartha Kitt, see if you don’t think Taylor’s channeling her in the opening and closing of this song, before she slips into her own trademark sound.