It was a night when everyone did different individual dances and then there was a fabulous group dance.

Some stars had a great week. Mel and Maks delivered a fantastic rumba (pictured on the left). The judges gave it a 10 and it was definitely their best dance, and the best dance of the evening. Sabrina and Mark did a wonderful foxtrot. It split the judges with Bruno and Len finding it too powerful. I also loved Jennie and Derek’s mambo. She was finally able to cut loose a bit more and that was great to see. The judges also had a hard time with Marie and Jonathan and their paso doble. I liked it. If anything I felt they were hindered a bit by the music they were stuck with.

There were some weaker performances this week from Jane and Tony. The jive is just not Jane’s dance. One of the judges (I think it was Bruno) said it was like a ballerina did the jive. It’s just not for her. It was fine, but it didn’t showcase her strengths. Hopefully she’ll survive another week to go at it again. Cameron’s samba was also not his best moment either. Again, it was fine, but not the great stuff we’ve seen lately. (And why were they dressed like Indians? I thought sure they’d be dancing to “Colors of the Wind.”) I also am just not a fan of Heilo. The dance was fine, but he just doesn’t sell it for me.

Now, the group dance was a blast. It was 50s rock ‘n roll with a jocks vs. greasers rumble. Everyone did a great job and it was a lot of fun to wrap up last night’s show. 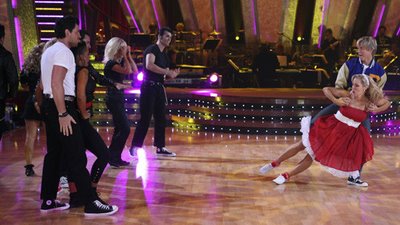 Picking someone to go home tonight is tough. Marie and Jane finished at the bottom of the judge’s leader board. I’d like to keep them both, and I would chose to send Heilo home. So I guess I’ll make that my official pick.

Results Show Update: What the hell! In five seasons of Dancing with the Stars I have never been as shocked as I am tonight. Sabrina was sent home!?! What were the home voters thinking? That girl had everything needed to go all the way and yet she was sent packing last night. Can we get a recount on that? I was braced for anyone but her and Mel B to go home… clearly the studio audience, the judges and the hosts felt the same way from their stunned reactions. Very disappointing.