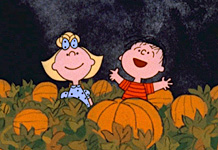 It was October 1966 when children first got to visit the pumpkin patch with It’s the Great Pumpkin, Charlie Brown. The special makes its yearly appearance next Tuesday (October 30) at 8pm ET on ABC, so it seems the perfect way to finish out this month’s “scary” Geek Outs. Great Pumpkin was the second of what I consider the classic Peanuts holiday trilogy. A Charlie Brown Christmas first appeared in 1965, then the great pumpkin arrived, followed in 1973 by A Charlie Brown Thanksgiving.

Great Pumpkin is classic Peanuts all the way. Sincere Linus misinforms Sally that the Great Pumpkin will be rising out of the pumpkin patch on Halloween night to bring toys to the children of the world, so of course they spend the night there to watch it happen. Poor Charlie Brown ends up with rocks in his trick-or-treat bag. And of course, there is the usual Schroeder vs. Lucy battle and Pig-Pen being his usual filthy self. The priceless line in the show belongs to Sally after that night in the patch: “I could have gone to tricks-or-treats! Halloween is over and I missed it! Instead, I spend the night on a pumpkin patch and all that came was a beagle! You blockhead! I could have had apples and gum, and cookies and money and other things! I’ll sue! Trick-or-treats only come once a year, and instead I spent all night sitting in a pumpkin patch! What a fool I was! You owe me restitution!”

So I’ll be planted in front of the TV Tuesday night, and hope you all will be too. This year the bonus cartoon is You’re Not Elected, Charlie Brown so it’s a full hour of Peanuts, leading into Dancing with the Stars. I can’t think of a better way to spend a night in front of the TV! If you want to get prepared for the night, visit the Great Pumpkin section on Snoopy.com. Make sure to try out the trivia quiz (I got 12 out of 12 right, showing my true Geeky status).