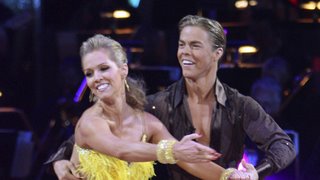 Another great night of competition in the ballroom. And it’s certainly been a season of drama. First, Jennie and Derek had their tumble. Then, last night, Marie, who had the first dance, fainted while getting her critique from the judges. Hopefully that plus her low scores won’t get her bumped off tonight because she’s been so enjoyable to watch.

It was sexy Latin night with the rumba (a sexy, erotic dance) and the samba (the carnival dance). Four couples really stood out for me last night. With the rumbas, Mark and Sabrina smoldered with a dance that oozed sex. Meanwhile, Helio, who has only been mediocre for me most weeks, really delivered the passion. On the samba side, Mel B showed she could really turn on the fun(and I think that’s the first time on the show anyone has danced to one of their own songs… Joey never did N Sync; Drew never did 98 degrees and the other Joey never did New Kids). Jennie and Derek were also spot on for me. It was great to see her cut loose (that’s actually Jennie and Derek from last night… I blogged late enough I could get photos from last night). Gotta give props too for Cameron and Edyta. After the fantastic Superman paso last week, their rumba was excellent. He’s become a real contender in this competition. And that leaves Marie, Jane and Mark. Marie’s samba was decent, but definitely on the bottom of the scale for the evening. Jane too was lackluster in her rumba; it just had no passion for me. Mark’s samba was very entertaining, but lacked technique.

For the bottom two tonight, I think it’s Mark and, sad to say, Marie. I think the leader board will guide the viewers this week. It is time for Mark to go home.

Results update: Got it right with Mark going home. Surprised that Jane was the other one who ended up in the bottom two. It gets hard from here because everyone else is so talented. J Lo gave two great numbers, and the professionals who danced with her in the second number were really great! Next week it’s two numbers… looking forward to it.