Friday Geek Out: Carrie The Musical

How do you spell Broadway flop? C-A-R-R-I-E! We continue this month’s series of “scary” Geek Out’s with one of the most delicious musical disasters ever. After a run in England, produced by the Royal Shakespeare Company, in February and March 1988, this musical based on the Stephen King novel came to Broadway. The show began previews on April 28, 1988, officially opened May 12 and closed on May 15 after 16 previews and 5 regular performances and some pretty nasty reviews.

Some pretty notable people were behind this musical. Betty Buckley (who was the gym teacher in the hit Carrie film and a Tony Award winner in the original cast of Cats where she got to belt out “Memory” on a nightly basis) starred as Carrie’s mother. Behind the scenes, the music was written by Fame composers Dean Pitchford and Michael Gore. Continuing the connection to Fame, Debbie Allen choreographed and Gene Anthony Ray (Leroy from the Fame movie and TV series) played one of the high school kids.

I’ve had some pretty serious Geek Out moments over this musical. I never saw the show, but I have acquired some items around the show courtesy of ebay. A few years ago I picked up a copy of a CD that was recorded during one of the Broadway performances (you can imagine that no official recording was ever made), a CD made of one of the British performances (where Barbara Cook played Carrie’s mom), a copy of the Broadway script and a video tape of the b-roll that was given to New York TV stations. It’s this videotape that is the only look at the show I’ve ever had… and it’s pretty wild. 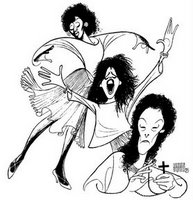 To me, it’s like there’s two different shows happening at the same time. There’s one with the high school kids who are out to get Carrie. Their music is heavy on synthesizer and the dance (from what bits I’ve seen) was very much from the Debbie Allen/Solid Gold school. One of the best examples of the music is the “Out For Blood” number where the mean kids go get the pig’s blood to drop on poor Carrie. “Will you help me kill a pig / and then I’ve got the plans for the blood” sings one of the girls while then the guys go into a chant of “kill the pig / kill kill kill /make him bleed / get the blood / out for blood.” None of this is on the video tape, but you have to imagine it must have pretty ridiculous on stage with the sound of squealing pigs in the background.

When Carrie is alone, or with her mother, this musical is completely different… very serious, with some quite good stuff going on. Buckley sounds great as the religious zealot trying to protect her daughter from the evils of the outside world. Linzi Hateley, who came over from London with the show…making her first and only Broadway appearance, was quite good as Carrie. From the CD I’ve got, it sounds like she and Buckley made a solid pairing. Apparently they remained friends because in 1996, during Buckley’s stint at Carnegie Hall, Hateley appeared with her and they sang some songs from the show.

Carrie has been produced rarely over the following years. From what I’ve read, the writers have only released the rights once for a college production and beyond that there have been a couple of unauthorized productions. There’s often rumor of a City Center revival in NYC, but that’s never happened either.

I’m afraid I don’t have any good clips to show. When I first added Carrie on the list of things I wanted to Geek Out about, there were several clips on YouTube, but those have been removed because of copyright claims filed by Actor’s Equity, the stage actor’s union. So, the one thing I do have is a clip that features one of the songs between Carrie and her mother as Carrie comes home from school after she gets her period in the showers after gym class. This gives you an idea of the interplay between these two. The video portion features some still photos from the show. It is worth the listen so you can say you’ve experienced a bit of Carrie: The Musical.