Friday Geek Out: Dance of the Vampires

It October, Halloween month, so I decided to focus on some “scary” things for Geek Out this month.

We will visit scary Broadway twice this month and we start with the gigantic flop called Dance of the Vampires. Now, this may have been a huge flop, loosing around $17 million, but it was a camp classic that Will and I went to twice. The show began previews in December 2002, but had the life completely sucked out of it before January 2003 was over (it played 61 previews and 56 regular performances). The musical, based on the Roman Polanski film The Fearless Vampire Killers, marked the return of Michael Crawford to Broadway for the first time since his Tony winning turn in The Phantom of the Opera. Critics ravaged the show, and the audience mostly stayed away. 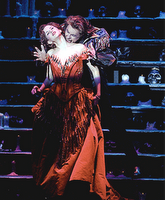 Even now, nearly five years since this show opened, I still love the music. The score was written by Jim Steinman, who was the subject of another Geek Out with Bonnie Tyler’s take on “Tire Tracks and Broken Hearts.” He penned a solid rock score, and also stole some music from earlier hits. “Total Eclipse of the Heart” shows up at the top of Act II as a duet between the vampire and the lady he wants to make his queen. One of the bigger problems I think the show had is that it took a more serious musical, which is the way it seems to be played in Europe (the show originated in Germany) and took it to a campy/comedic place when it was transplanted to Broadway. To listen to the score, even as it was produced here, the music is dramatic and romantic. Sadly the book took the comedic turn. Rumor has it that Crawford had creative control over the show and was out to do a Mel Brooks-style show (probably a bad choice since Brook’s was on Broadway at the time with The Producers).

But, as I noted, we saw it twice. The music was great. The dancing was energetic and fun. The vampires were sexy (they could have all been in a WB show). Crawford was a hoot. We both have the score on our iPods (you can get the score, by the way, at site for German production… the demos produced for the English version of the show are still available.). Take a moment now to watch some video from the show to sample what the show is like.

First up is a video that someone made inside the Minskoff Theatre. It shows the opening number, and you’ll think you’re in for a solid show… until Michael Crawford speaks his first line as the coffin rises up out of the stage.

Next up is a Tanz der Vampires medley from German TV. This has a bit of the towns folk concerned about the vampire in their town, followed by “For Sarah” (Sarah’s love wonders where she has gone), “Total Eclipse of the Heart” (or, as it’s known in this show “Vampires in Love”) and a bit of the finale. Note, it’ll take about 30 seconds for the host to get through her intro.

Lastly, an extended look at the Tanz der Vampires finale. If this song sounds familiar, it’s because Steinman borrowed heavily from “Tonight Is What it Means to Be Young” from Streets of Fire.

Maybe someday someone will revive this with a proper book and U.S. audiences can see what this show is really supposed to be.

The Demon Barber is Coming…
On the same topic of scary Broadway, the trailer has just been released for Tim Burton’s take on Stephen Sondheim’s Sweeney Todd. Yup, Johnny Depp will be singing Sondheim for Christmas (although you’d hardly know it from this trailer)…