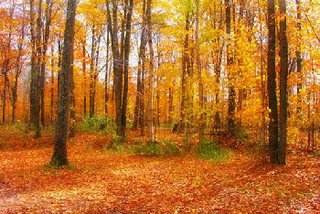 Happy Fall! It is, as regular readers know, my favorite time of year. Crisp air, clear skies… and it means the snow will be here sooner rather than later (unless this year is like last when there was such a sad snow drought). It doesn’t feel very fall-esque today, but there’ve been hints of it in the past couple weeks and it looks like later this week it’ll be back! Yay

Fall Means…: Saturday morning hockey has rolled back from starting at 8am to starting at 5am and next week it lands at 4am where it will be until sometime in February or March. I love playing at this hour. It’s just a few people (today was 10) playing for a couple of hours. It’s such a blast. It’s a chance to play with people who are significantly better than me, which only helps my own game… and it’s lots of ice time. I was exhausted when I came home. It was like being a kid playing outside until you can play no more. It’s a great feeling!

Betty, Betty Betty: ABC Family has an Ugly Betty marathon today, showing 13 of the season’s episodes. It’ll be hard to get anything meaningful done since it will be very easy to sit on the couch and just watch. It’s the perfect thing to get ready for next week’s premiere.

New TV Season: Some of the new TV season debuted last week. Soooo disappointed so far. Prison Break was a huge disappointment. No only is it disappointing that everyone’s back in prison again, but the writing was flat and dull (some of the episode seemed lifted right out of Max Max Beyond Thunderdome… all that was missing was Tina Turner). We also looked at Gossip Girl and bailed at the second commercial break. The characters weren’t interesting and it all seemed like a pale imitation of Cruel Intentions.

Next week the season really kicks off. Of course, looking forward to Dancing with the Stars (three nights next week, wow!), Heroes, Smallville and lots more. The DVR will definitely be working overtime.

First Week of Work: It’s been a great week at work. First, it’s been nice to feel more at ease. There’s more work to do, especially getting up to speed on things, but it’s not overwhelming either. It’s a good change of pace.

Something I realized to make the work location even better: I’m 5 blocks away from free ice skating in Bryant Park, which will start up some time in late October if it stays on the same schedule as last year. So, it is possible I can hop out at lunch time and do some skating! And talk about a nice setting for skating…

Coming Out: October 11 is National Coming Out Day and this year it is also the 20th Anniversary of the Lesbian and Gay March on Washington and the first unfurling of the Names Project AIDS Quilt on the National Mall. This year for National Coming Out Day, the Human Rights Campaign is reaching out to the LGBT community to create a collection of stories about their coming out experiences. Learn more about this initiative on HRC’s website (and with the video below) and consider sharing your story.