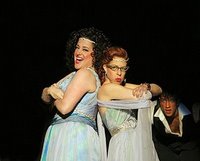 “The gays in the back row get it,” announced evil muse Calliope as she, Melpomente and Kira were trying to explain that they were Greek muses to the rather clueless Sonny. Indeed, we did get it. Will and I were one of six people seated in the back row of one of the sections of on-stage seating at this afternoon’s Xanadu matinee. We don’t know for sure, but are pretty sure that the other four guys in the row were gay too. And, yes, we all got it!

We had a GREAT time at the show! As you already know if you’ve read our previous Xanadu posts, we like this show a lot. We went back today as part of our anniversary weekend and decided to take advantage of the on-stage seating (which are the cheapest seats in the house at just $41.25). This is a great way to see the show, especially if you’re in the section we were in, which was just to the left of center stage.

Not only did Jackie Hoffman (pictured above on the right), call out the gays in the back row (Will responded to by raising his arms and give a loud “wooooo”), she also shared some popcorn with Will while she was sitting in front of us. Meanwhile, Mary Testa (above, on the left) felt me up while she was behind me singing “Strange Magic.” That was unexpected! 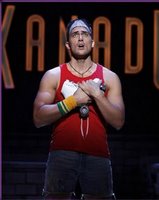 Adding to the great time was sitting within 20 feet (and less at times) of hunky Cheyenne Jackson as Sonny. When we originally saw the show, James Carpinello was playing Sonny. But he’s been out of the show due to a skating injury and we’d wanted to see Cheyenne. It was worth the wait, not only is he a delight as Sonny, he’s good to look at in those shorts (sorry, there are no good production photos to show off the shorts, but you can appreciate his arms in this picture).

So, it was a fabulous afternoon at the theatre… and who knew we’d be outed to the audience at the Helen Hayes Theatre too!?! If you’re in the NYC area, go see the show. You’ll have a great time… and an even better one if you decide to sit on the stage and become part of the the Xanadu magic.