It’s a two for one this week on the Geek Out! Why? I haven’t had time to write much this week, so I decided to hit on two things that have caught my inner-geek this week. 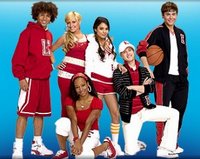 First, tonight High School Musical 2 debuts on The Disney Channel. This is the first thing that has had double Geek Out status, since I first wrote about HSM back in May when the concert premiered. Of course, tonight is a much bigger deal. The previews for tonight’s movie give me flashbacks to Beverly Hills 90210 during the summers when the whole gang would end up working at the Beverly Hills Beach Club. In HSM2, everyone’s off to a country club to work and, of course, sing some snappy songs and dance a few hip moves. I downloaded the soundtrack earlier this week and actually like it better than the original. Let’s take a moment and get into summer vacation with the Wildcats! Here’s the video for “What Time is It?”

More on HSM this weekend as I’ll write up what I actually thought of the movie.

Shifting gears considerably now—and getting far more geeky—let’s look at a TV show of old. Netflix deposited the first two discs of The Secrets of Isis in our mailbox this week. This show was part of CBS’ Saturday morning lineup in 1975 and ’76. I don’t remember it being standalone though, as it is presented on DVD. I recall it being paired with Shazam! as a complete hour of programming (sometimes with cross over episodes…maybe disc 3 has those… we’ll find out this weekend).

Isis overall doesn’t age as well as Ark II, but it is still a blast to watch. Science teacher Andrea Thomas becomes Isis thanks to an amulet she found. All she has to do is say “Oh mighty Isis” (along with the proper echo) and she transforms. Then it’s “Oh zephyr winds which blow high, lift me now so I can fly.” Isis always has a good turn of phrase when she needs to get something done, as the clip illustrates. In this video (sorry for the fuzzy quality, but it is the best I could find) Andrea not only becomes Isis, she calls on the zephyr winds and pulls out a few other tricks to help out some joy riding teens.

Now they need to put Shazam! on DVD too. A lot of the old Filmation shows are getting released, so hopefully it’s on the agenda.