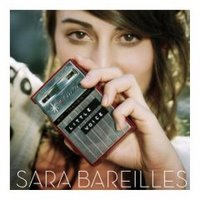 Sara’s Little Voice: I wrote a couple weeks ago what an amazing experience it was finding someone I knew as the download of the week on iTunes. This week I picked up Sara’s major label debut, Little Voice, and it is as great as I thought it would be. It’s really incredible seeing what she has become in the years since we’ve seen her last. I think she’s on the road to great success (I’ve seen the album as high as #2 this week on iTunes, outpacing Kelly Clarkson) and it certainly happening to a great person. Keep it up Sara! You can hear samples of her songs over at her website: sarabmusic.com.

Who is Back! The third season of Doctor Who started last night on Sci-Fi. The season opened with the annual Christmas episode, and what is Christmas without some killer Santa robots? Anyway, it was a great opening for hopefully a great season (yes, Brian, I know you’ve seen how it ends and didn’t like it… but please don’t spoil things for the rest of us). Sci-Fi seems to be the place to be this summer. Next month, a new series, an update of Flash Gordon begins. The promos use the theme that Queen wrote back in the 80s for the campy Flash Gordon film, so I’m curious to see what the series will be like.

Ugh: The more I see about I Now Pronounce Your Chuck and Larry, the more the movie sounds simply offensive. The set up is this: “Two straight, single Brooklyn firefighters (Adam Sandler, Kevin James) pretend to be a gay couple in order to receive domestic partner benefits.” I just don’t see how this movie can be anything except an opportunity for an immature audience to mock an issue that is very serious for many Americans. I hope there is more here than meets the eye.

Movie Mania July: Ignoring the movie above, July is a movie-goers dream… hopefully. It started this week with Transformers (which we are seeing tomorrow), then moves on to Harry Potter (July 11), Hairspray (July 20) and The Simpsons Movie (July 27). That’s $70 worth of movies we’re slated to see. (Why $70 and not $80 you may ask? Will doesn’t do Harry Potter movies.) Will it be worth all that? We’ll see as the weeks roll by.