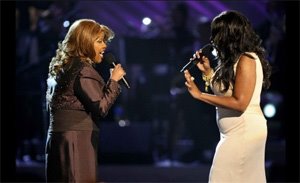 Divas Unite: Will posted yesterday, briefly, about the amazing union of Jennifer Hudson and Jennifer Holliday singing “And I Am Telling You I’m Not Going” from Dreamgirls on the 2007 BET Awards. For a few hours Will had the clip up from YouTube, but YouTube has been pretty vigilant about getting that clip pulled down (no doubt at BETs insistence since the show is re-airing a number of times this weekend). We caught a rebroadcast last night. It’s a bring-down-the-house performance. Look for it on BET this weekend (or on YouTube if you can catch it there). I’m sure this will end up on a Dreamgirls super-special-please-buy-the-movie-all-over-again DVD by Christmas time. In the meantime, I recorded the audio to my computer so I can have it on my iPod.

Blame, Blame, Blame: Former Grey’s Anatomy star Isaiah Washington has been in the news a lot the past few weeks. He’s apparently trying to blame everyone but himself for getting fired from the show. This week he’s saying race played a part in his firing. Check out this article from Newsweek/MSNBC and see what you think of his take on events. Can all of his continued talk really be good for his career?

iWhy?: I get that the iPhone is pretty cool. But cool enough to spent the better part of a week lined up outside an Apple store to get one? I hope those early buyers find it was worth their time. The last time I waited outside any length of time for something was while I was in college… a bunch of friends camped outside the local FastTixs outlet to get tickets to the Rolling Stones Steel Wheels tour at Legion Field in Birmingham… total time waiting, about 16 hours. In the Internet age I simply can’t imagine doing this for anything, but it’s nice to see that Apple knows how to whip up a frenzy.

Say “No” to Paris: Kudos to MSNBC anchor Mika Brzezinski. Earlier this week she refused to lead her news segments with the Paris Hilton story, especially ahead of some of the more major world news that was going on. Will over at Soliloqueer posted a YouTube clip of her continued refusal, even though her producers and co-anchors kept trying to get her to do the story. 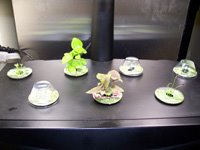 Garden Update: The plants just keep growing. The basil is starting to smell like basil, which is really nice! The mint got uncapped this week. I’m convinced we’re never going to see any dill come up. The parsley will likely get uncapped this coming week. I snapped a quick picture this morning just to have a record of where it is this week. Along the back row from left is mint, green basil, dill and cilantro (which is also growing, by the way). In the front is the parsley, purple basil and chives.

People Do Like Us?: Not sure how much faith to put in these numbers, but the Human Rights Campaign Back Story blog reports on a survey from the Log Cabin Republicans that 67% of republicans believe that employers should not be able to fire people based on sexual orientation. That’s great news, but odd coming out of the Republican camp (unless they happened to only survey queer Republicans). Better news is that a recent Gallup poll shows that the American public overall is becoming more positive on the ideas of gay rights and even gay marriage. I was happy to see the poll just as pride month comes to a close.