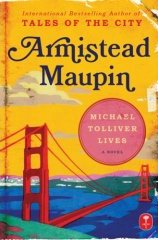 I zipped through Armistead Maupin’s Michael Tolliver Lives over this past week, and it was a wonderful read. It’s cliched to say, but it’s true that this felt like a visit with old friends. Michael Tolliver Lives is told from Michael’s point of view (as opposed to other Tales of the City books that were told in third-person). He’s in his 50s now and as the book begins he tells the story of how he met his husband, Ben, a guy in his 30s.

In this tale, Michael and his husband deal with Michael returning to Florida to see his dying mother and make peace with his older brother. Several Tales characters also appear. Brian Hawkins and Anna Madrigal are major supporting characters to the story and we also get to find out what the years have brought to Mona, Mary Ann, D’orthea and even 28 Barbary Lane itself.

I’m not going to delve too much into the plot because it wouldn’t be fair to give that away. I will say this book made me laugh out loud and also brought tears to my eyes, sometimes in the most unexpected places. Fans of Maupin’s work will love this book. Those who haven’t read any of the Tales series can also read this as a standalone volume and experience a loving relationship plus get a good look at what family is in this decade.