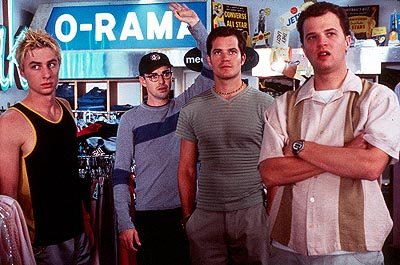 The Broken Hearts Club came out in 2000 and immediately became one of my favorite gay movies. Officially subtitled “A Romantic Comedy,” the movie covers the gambit of gay characters—those looking for commitment, those afraid of commitment, newbies just coming out of the closet, those who get mixed up in drugs while looking for happiness and those who have long-term commitments.

The cast is star-filled too: Dean Cain, Timothy Olyphant, Andrew Keegan, John Mahoney and an almost unrecognizable (pre-Scrubs) Zack Braff. Jennifer Coolidge also shows up as the hairdresser all of the guys confess their troubles too. She has nearly no lines, but she virtually steals all the scenes she’s in.

The core of this movie is the tight friendship between Cain, Olyphant, Braff, Matt McGrath, Ben Weber, and Billy Porter. They’ve been through everything together, but the course the movie takes puts their friendship to the test. Keegan enters the picture as a young guy just coming out and he gets attention from both Cain and Olyphant. Braff ends up becoming an addict while trying to win the affection of a guy he meets at the gym. Taylor and McGrath both go through breakups. The friends all work and/or hang out at a restaurant called Broken Hearts, which is owned by Mahoney. They all play on the Broken Hearts softball team too and it’s the softball games that provide some of the funniest moments in the movie. Mahoney’s role as a sort of father-figure/fairy godmother to the guys is also at the emotional core of the film.

I don’t want to give away much more of the plot. I’ll simply tell you that if you haven’t seen this movie to rent it or look for it on Logo (where it shows up a lot). You’ll laugh, you’ll cry and you’ll have a great couple of hours.