Audra vs. Christine: Smackdown at the Tonys 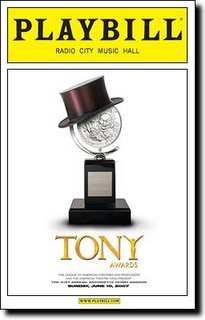 How’s that for a attention getting headline? Actually, it’s a silly headline… but the Best Performance by a Leading Actress in a Musical is probably the most watched category in tonight’s Tony ceremony. Audra McDonald closed the season with an amazing turn as Lizzie in 110 in the Shade while, back in October, Christine Ebersole transferred her career defining performance in Grey Gardens from off-Broadway to Broadway. If I were a Tony voter, I don’t know how I’d cast my vote, as a fan of both performances I’m hoping for a tie because they are both deserving.

Here’s a rundown on my picks in tonight’s major categories:

First the shows:
Best Play: The Coast of Utopia. It’s a three-part, nine-hour masterpiece by Tom Stoppard and that can’t help but equal Tony.
Best Revival of a Play: Journey’s End. This compelling drama about a group of British officers as they await their day of reckoning. It will win the Tony on the same day that it closes because, although critically hailed it was ignored by audiences.
Best Musical: Spring Awakening. Another transfer to Broadway this season, this one about angsty teenagers in 1891 Germany discovering their sexuality.
Best Revival of a Musical: Company. John Doyle was robbed last year when his innovative Sweeney Todd was passed over in favor of Pajama Game. This year’s revamping of Sondheim, again with the actors serving as the orchestra will come out on top.
Best Book of A Musical & Best Score: Spring Awakening in both categories for it’s excellent story telling and rock music.

And now the actors:
Leading Actor in a Play: Frank Langella in Frost/Nixon. Langella’s turn as Richard Nixon has drawn nothing but raves.
Leading Actress in a Play: Julie White in The Little Dog Laughed. White was standout as a Hollywood agent in this wicked comedy.
Leading Actor in a Musical: Raúl Esparza in Company. He’s delivered remarkable performances in many roles in past seasons, and now he will finally take home the top prize.
Leading Actress in a Musical: If there’s a theatre god there will be a tie here. Otherwise, Grey Gardens Ebersole will come out on top.

And I think Spring Awakening will come out with the most awards of the evening.

Update: I did very well with the predictions, getting 10 out of 11 right. I only missed Leading Actor in a Musical and I can’t believe that Raúl Esparza lost to David Hyde Pierce! Spring Awakening did indeed come through with the most awards, receiving 8 of the 11 they were nominated for.