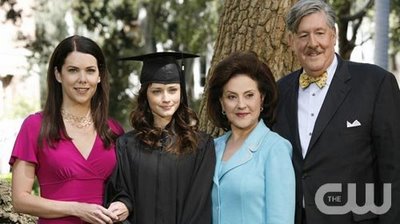 Like many Gilmore Girls fans, I’ve found the last couple of years to be difficult. After loving seasons 1-4, I found season 5 to be less than stellar, big chunks of season 6 to be painful and I abandoned the show all together after this season’s debut. It seemed as though the script writers were trying too hard after the show’s creators left the day-to-day show running. However, when I heard the show was having its season finale this week, I set the DVR to record it so I could see how things turned out. I have to say my final visit to the Gilmores was satisfying, with some pretty snappy writing and a nice look at what the future held for Rory, Lorelai, Luke, Richard & Emily and the rest of the gang. I’m glad the series ended better than the typical episode was over the past couple years… and that I came back one last time.

Meanwhile, Thursday TV was a dangerous place to be as the season finales of Ugly Betty, CSI and Smallville showed.

After Heroes on Monday and the crowning of the champion on Tuesday’s Dancing with the Stars, the TV season wraps up and the DVR will become a much calmer place.